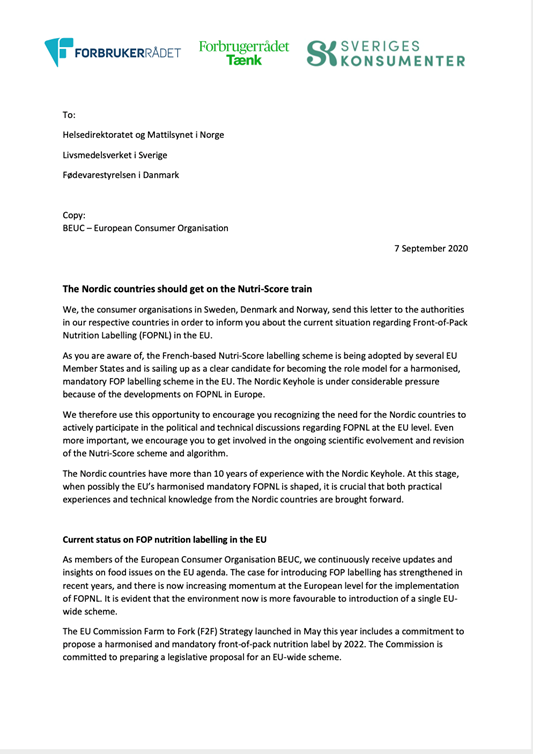 The Nordic countries should get on the Nutri-Score train

We, the consumer organisations in Sweden, Denmark and Norway, send this letter to the authorities in our respective countries in order to inform you about the current situation regarding Front-of-Pack Nutrition Labelling (FOPNL) in the EU.

As you are aware of, the French-based Nutri-Score labelling scheme is being adopted by several EU Member States and is sailing up as a clear candidate for becoming the role model for a harmonised, mandatory FOP labelling scheme in the EU. The Nordic Keyhole is under considerable pressure because of the developments on FOPNL in Europe.

We therefore use this opportunity to encourage you recognizing the need for the Nordic countries to actively participate in the political and technical discussions regarding FOPNL at the EU level. Even more important, we encourage you to get involved in the ongoing scientific evolvement and revision of the Nutri-Score scheme and algorithm.

Current status on FOP nutrition labelling in the EU

As members of the European Consumer Organisation BEUC, we continuously receive updates and insights on food issues on the EU agenda. The case for introducing FOP labelling has strengthened in recent years, and there is now increasing momentum at the European level for the implementation of FOPNL. It is evident that the environment now is more favourable to introduction of a single EU- wide scheme.

The EU Commission Farm to Fork (F2F) Strategy launched in May this year includes a commitment to propose a harmonised and mandatory front-of-pack nutrition label by 2022. The Commission is committed to preparing a legislative proposal for an EU-wide scheme.

The European Parliament's Environment Committee held an exchange of views between MEPs and the European Commission on the issues of front-of-pack nutritional labelling in late June. The Commission confirmed that an impact assessment process would be launched and that the involvement of EFSA is foreseen. The new German Presidency is also planning to produce Council Conclusions on front-of-pack nutritional labelling (FOPNL). In preparation for these conclusions the Presidency is gathering opinions from Member States via a questionnaire. As far as we know the responses of the survey will also form the basis of the organisation of a conference in Bonn 12-14 October 2020 of National Food Directors which will be held as part of the Presidency.

There are considerable support for Nutri-Score among EU Member States, but also among NGOs and consumer organisations. BEUC calls for Nutri-Score to be made mandatory across Europe and is actively lobbying for Nutri-Score at the EU level. Many consumer organisations in Europe, also members of BEUC, advocate at national level for the implementation of Nutri-Score. The current BEUC position is that there is no perfect system, but the scientific evidence shows that Nutri-Score is currently the best-performing scheme in helping consumers to compare food products and make healthier choices. BEUC thinks it is important that regular systematic reviews allow for certain improvements to the scheme to consider developments in scientific knowledge and the food market.

Six EU countries have until now announced that they will implement Nutri-Score, and France, Belgium, Germany, and now also Spain, is currently formalising its endorsement and notifying the scheme to the EU. Meaning, meanwhile the Commission and the German Council Presidency are conducting F2F-implementation actions, several Member States are actively working on Nutri-Score at national level.

A Scientific Committee is in the process of being convened to review the Nutri-Score label and consider potential adjustments to the scheme with nutritional experts from countries where authorities have endorsed the scheme for use in their territory. The Scientific Committee tasked with the Nutri-Score review will comprise experts from countries having endorsed the scheme.

The Nordic countries need to get involved

Consumers need help to better understand the nutritional value of food products and to comprehend the content of fats, saturated fat, salt and sugar. The Keyhole is in this respect a valuable tool, as an evaluative FOP label. It is regulated as a health claim, and points at the “most healthy” product within a food category based on an overall evaluation. Consumers in the Nordic countries are familiar with the scheme and it has over years gained trust in the population. Familiarity and trust are important aspects for a label to succeed.

Both the Keyhole and the Nutri-Score are evaluative schemes, or 'summary indicator' schemes as the EU Commission calls them, that provide a synthetic appreciation of the product's overall nutritional quality/healthfulness. The Nutri-Score could be viewed as an extension of the green Nordic Keyhole, as it is using a 5-lettered colour-coding scale from green A to red D.

Too some, and at first sight, these schemes may seem complementary, but this is not the case as they have different nutrient profiling models. Based on sample checks and reviews, we are concerned about how the current Nutri-Score would perform in the Nordic market and fit with the dietary guidelines in the Nordic countries.

As already mentioned, Nutri-Score may become the role-model for a mandatory EU-wide labelling scheme. Now is the time to put efforts in making it as strong as possible, also for consumers in the Nordic countries.

We therefor urge the authorities and public institutions with experts on food labelling and the Nordic Keyhole to actively engage at the EU level and with the consortium leading the scientific work on evolving Nutri-Score.

The experts and scientists working on Nutri-Score, lead by prof. Serge Hercberg, are aware of the scheme’s weaknesses, and also see the need for further developments and revisions. We hope and assume the Scientific Committee is open to experts from other European countries where authorities have not yet endorsed the Nutri-Score, such as experts from the Nordic countries. The experiences gained through years of work with the Nordic Keyhole are of huge value in an EU context and should not be underestimated in this process towards a common EU FOP label.